Companies that are considering commercial use of images of landmarks in Italy, without having obtained prior authorization, would do well to consider the implications of such a move, given two decisions involving Italian works of artistic and cultural heritage.

According to the Italian Code of Cultural Heritage and Landscape (instituted by Legislative Decree No. 42/2004), cultural property consists in any physical form, whether movable or immovable, that possesses artistic, historical, archaeological, or ethno-anthropological interest. Cultural property includes historic buildings, works of art, and archeological sites, to name a few. The reproduction of works of art and the images of historic monuments (where considered cultural property) is governed by law as well.

The Italian Code of Cultural Heritage and Landscape was introduced to impose the obligation that parties request authorization to make commercial use of the reproduction of works of art and images of historic monuments and pay a fee for doing so. Certain uses were excluded from this obligation. For example, the reproduction of such images by private individuals is free when it is made for personal use and for the purpose of study, research, creative expression, or enhancement of cultural heritage.

The 2004 Code was enacted by the Italian Parliament to protect the value of the country’s cultural patrimony and to avoid potential detriment, through the unauthorized use of such images, to the historical and cultural values of the country.

Pursuant to Article 107(1) of the Italian Code of Cultural Heritage and Landscape, “the Ministry, the Region and other territorial government bodies may permit the reproduction as well as the instrumental and temporary use of the cultural properties committed to their care, save as provided for by the provisions in paragraph 2 and those concerning copyright.”

Moreover, in accordance with Article 108(1) of the Code “concession fees and payments connected to the reproduction of the images of cultural properties are established by the authority to whose care the property is entrusted, also taking into account:

The payment of such fees undoubtedly constitutes a significant source of income, necessary to support the management and the protection of cultural heritage.

The above provisions have existed mainly on paper and have been rarely applied in practice. That is, until now.

Within this legislative framework, decisions by Italian courts on the reproduction of cultural heritage images have set important precedents and potential models for the future. 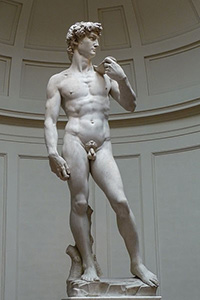 In its order No. 137587/2017 issued on October 25, 2017, the Civil Court of Florence ruled that images of Michelangelo’s David statue (pictured left) can be used only with the authorization of the Gallery of the Academy of Florence, the administrative authority that protects this work of art. Order n. R.G. 13758/2017 of the Court of Florence.

In this case, the travel agency and tour operator “Visit Today” reproduced the image of Michelangelo’s David statue in its promotional material (such as flyers and website) without the authorization of the Gallery of the Academy of Florence. According to the judges, “it does not appear that Visit Today has ever asked for or received such permission, while it is documented that they used the image and the name of David to advertise their business.” Therefore, the judges declared that the reproduction of the image of Michelangelo’s work of art was unlawful.

The ruling said that “there is no doubt on the qualification of Michelangelo’s statue of David as cultural property, nor on the fact that the authority to whose care the property is entrusted is the Gallery of the Academy of Florence, under the auspices of the Italian Ministry of Cultural Heritage and Activities; consequently, its use for commercial purposes carried out through the reproduction of its image must be authorized by the administrative authority.”

Therefore, on the basis of Articles 107 and 108 of the Italian Code of Cultural Heritage, in the absence of an administrative authorization and payment of the related concession fees established by the administrative authority, the court said that the reproduction of the image of Michelangelo’s statue of David for commercial purpose must be considered unlawful. The court ordered Visit Today to (1) remove all images of Michelangelo’s statue of David from its digital and print promotional material; (2) publish the decision in three national newspapers and on Visit Today’s website; and (3) set a EUR 2,000 (US $2,289) fine for each day of delay in complying with the order. 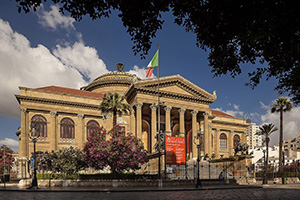 A month before the above ruling, another important judgment on the unauthorized reproduction of images of cultural heritage was issued by the Court of Palermo. Decision n. 4901, Sept. 21, 2017. The Teatro Massimo Foundation sued an Italian bank that was using the image of the historic and well-known Teatro Massimo in Palermo (pictured right) in its advertising campaign aimed at promoting the bank’s branches in the territory. Decision n. 4901/2017, RG n. 1471/2014.

The defendant argued that, for images of cultural heritage visible externally, there is no right of property and they can be freely used by third parties even for commercial purposes, as long as the use is not detrimental to the artistic and cultural value of the work depicted.

The court ruled that Teatro Massimo’s images were owned exclusively by the Teatro Massimo Foundation and accepted the plaintiff’s claim for compensation for pecuniary damages, although it reduced the requested amount in the absence of a schedule of fees for the concession by the plaintiff.

The bank argued that, under the freedom of panorama doctrine, it was permitted to use freely a photograph of the Teatro Massimo. The freedom of panorama doctrine provides that photographs of buildings, monuments, and other art works which are permanently located in a public place do not infringe on any copyright. The court rejected this argument because the bank had used the images of the theater for commercial and promotional purposes.

With respect to the Foundation’s request to be paid non-pecuniary damages resulting from the commercial exploitation of Teatro Massimo’s image, the judge considered that no damage had occurred in that case, since the historical and artistic value of the Teatro Massimo had not been damaged by the nature of its reproduction.

While it is unclear whether the above rulings will apply to all objects that portray Michelangelo’s David or the image of Palermo’s Teatro Massimo that are sold across Italy, these cases undoubtedly represent significant precedents and a warning for vendors that continue to sell souvenirs that reproduce renowned cultural works without prior authorization from the competent administrative authority.

The author Elisabetta D’Amore is a European Trademark Attorney and partner with SIB.