The EU-Japan trade agreement brings with it enhanced protection for intellectual property rights in Japan and recognition for 200 European geographical indications as well as the progressive elimination or reduction of tariffs on food products, clothing, footwear and leather goods. 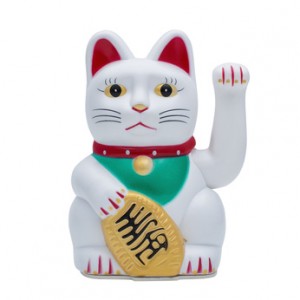 Maneki-neko, the cat with a raised paw beckoning to customers, is often placed in the window or entrance of Japanese shops to bring good luck and prosperity.

The European Union and Japan have reached an agreement in principle on the main elements of an Economic Partnership Agreement.

Principles agreed upon include removal of most of the tariffs paid by EU companies and enahncing the protection in Japan of intellectual property rights, including 200 Geographical Indications (GIs) and Protected Denominations of Origin (PDOs).

The agreement was announced on 6 July 2017 by the European Commission and by the Japanese Prime Minister Shinzo Abe, who said that the deal would create “the world’s largest free, advanced, industrialized economic zone”.

What’s in the agreement

In essence, the deal gives Japanese automotive firms unrestricted access to European Union markets. In exchange, Japan opens up its markets for European food and beverages as well as for other industries in which the European Union is very competitive, such as clothing, footwear and leather goods.

The main points of the agreement from the point of view of European enterprises are:

The chapter on intellectual property rights builds on the provisions of the World Trade Organisation Agreement on Trade-Related Aspects of Intellectual Property Rights (TRIPS) and is strongly based on the existing European Union standards for protection and enforcement.

Protection is improved in particular for copyrights and industrial secrets, which will be very similar to that of the European Union.

Other specific provisions concern the duration of pharmaceutical patents and the protection of trademarks as well as of product appearance by unregistered design or under unfair competition rules.

Recognition of GIs and PDOs registered in the European Union

The agreement provides for the automatic protection in Japan of a list of over 200 GI and PDO products registered in the European Union. The list may be added to in the future.

Protection will be extended to conflicts between GIs or PDOs and later trademarks. Trademark applications conflicting with GIs and PDOs registered in the European Union and recognised in Japan under the new agreement will be refused.

Co-existence rules are provided for trademarks filed in Japan before the entry into force of the new agreement.

This deal means that European GIs and PDOs will soon be protected by bilateral agreements in the three major markets of the Far East: in June an agreement was reached with China for the recognition of 100 European GIs and PDOs, while a similar deal with South Korea has been in place since 2012.

As far as wines and aromatised wines are concerned, the current 15% tariff will be cancelled upon entry into force of the new agreement. Cheese will see a gradual reduction, and fresh cheese imports will still be subjected to quotas that will rise with the increase of consumption in Japan.

Other industrial and handicraft products
The liberalisation of imports from the European Union into Japan will be complete for textiles, clothing, shoes and leather products, as well as for cosmetics, chemicals and plastic.

The Japanese quota system has so far significantly hampered EU exports, particularly as far as leather goods and shoes are concerned. Quotas will be scrapped upon the entry into force of the agreement, with tariffs on shoes to be reduced from 30% to 21% and then eliminated over ten years. Tariffs on other leather products such as handbags will also be gradually eliminated over a decade.

The agreement announced on 6 July is admittedly in principle. Work now continues to finalise the text, which should be ready by end 2017 according to official statements.

Entry into force will happen only after the final text is approved by the European Parliament and by individual European Union member states; some believe this could be accomplished by 2019.