Every night at about  9 p.m. a fascinating mix of music and lights in Piazza di Pietra takes this very central square of the city of Rome back to the times of the emperor Hadrian, retracing the construction of his temple and the survival of its remains, by integration into later buildings, for almost 1900 years. 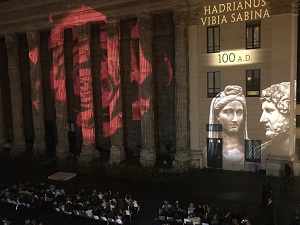 The “Luci sul Tempio di Adriano” light show is free. It is organised by the Chamber of Commerce of Rome which has its seat within part of the original temple, with the support of SIB Società Italiana Brevetti whose head office is on the opposite side of the square, facing the temple.

On 12 July 2018 the opening night was attended by the Mayor of Rome Virginia Raggi and by the President of the Chamber of Commerce Lorenzo Tagliavanti. Actor Giancarlo Giannini performed a public reading of an excerpt from Marguerite Yourcenar’s “Memoirs of Hadrian” for the occasion. 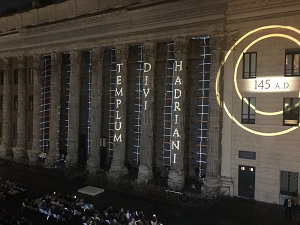 Before the inauguration the mayor presented Fabrizio de Benedetti, President of SIB’s Board of Administration, with a medal in recognition both of SIB’s support for the initiative in favour of Italian cultural and artistic heritage and of the contribution that SIB has given to the protection and enforcement of intellectual property rights in over 135 years of activity.